The Problem of Overmedicating Alzheimer’s Patients 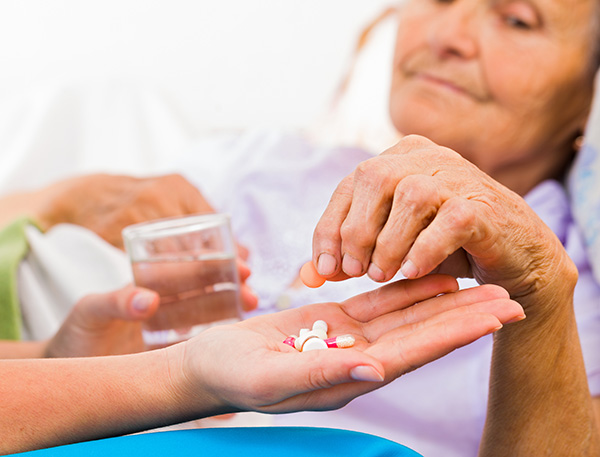 Polypharmacy is defined as the concurrent use of multiple prescription medications and it is unfortunately a prevalent issue in the elderly American population. The more medications a person takes, the higher the risk of dangerous drug-drug interactions and increased possibility of inappropriate prescribing, adverse drug reactions, hospitalization, and even death. Patients who have Alzheimer's disease (AD) or other forms of dementia often take dangerous combinations of doctor-prescribed medications, increasing their risk of further mental deterioration, dangerous drug interactions, unintentional falls, and overdoses.

Alzheimer's disease presents itself with neurofibrillary tangles and amyloid plaque in the brain. Thus far, the most successful treatment course is pharmacologically based. These medicines target the central nervous system (CNS) through the brain blood barrier (BBB) in nearly every case. The medications affect the complex processes of continuous cross-talk between the cells that constitute the BBB and the CNS.

The Prevalence of Overmedication

There is a dangerous trend of overmedicating, particularly problematic for the one in seven people living with dementia taking three or more medications who live outside of a nursing home or other professionally monitored environments. Many of these prescription drugs include opioids which seem to present the most troubling combinations of drug therapies. The US Department of Health & Human Services, through the National Institute on Aging (NIA), outlines some basic information regarding managing medicines for a person with Alzheimer's disease.

Health Day News reports lead study researcher Dr. Donovan Maust, associate professor of psychiatry at Michigan Medicine, says, "About half of the top 20 combinations included an opioid plus other CNS (central nervous system) depressant medications." The University of Michigan's study focus was analyzing 2018's Medicare prescription data for more than 1.2 million people with dementia. At the  University of Michigan's Academic Medical Center, the report shows that individuals older than 65 should not take three or more prescribed CNS active medications simultaneously as drug interactions can be potentially dangerous, even fatal.

Despite these findings, nearly 14 percent of dementia patients took three or more CNS active drugs concurrently for at least one month. Of that same group, almost 58 percent of patients were on at least three overlapping medicines for more than half the year, while seven percent took three or more for the entire year. Study findings report that the most common drug combination included at least one antidepressant, one antipsychotic, and one anti-epileptic. More than nine of ten patients who took three or more medications took an antidepressant, and nearly two-thirds were taking an anti-seizure drug.

In the same Health Day News report, Maust says, "Obviously, it's very concerning for patients with dementia that you'd be giving them medications that actually seem to cause further deterioration in their cognition." This study's findings were published on March 9, 2021, in the American Medical Association Journal (JAMA). While overmedication is troubling and potentially dangerous, there is also concern about pain being undertreated in older adults, particularly those with Alzheimer's who may have difficulty articulating their pain.

How to Avoid Over Medication

An Alzheimer's patient's physician should routinely conduct a comprehensive medication review (CMR) to limit multiple prescriptions' negative effects. The purpose of the evaluation is to have one doctor evaluate all of the medications taken. A CMR appointment must be scheduled specifically as most medical offices slot appointments in 15-minute increments, which is too short to review several medications. A full list, including non-prescription drugs, is essential for a comprehensive medication review. A doctor treating older Alzheimer's patients might change dosage amounts because of the potential for further mental confusion. Changes in dosage may also be prudent as more senior bodies process medications differently and often less efficiently in the digestive system, kidneys, and liver.

Dr. Maust believes that many of the drugs used to treat Alzheimer's disease may pose more risk than benefit for a patient when taken in combination. Evidence points to instances when antidepressants and antipsychotics may contribute to reasoning and memory loss among dementia patients and other problems. Despite all the research, there is no known cure for Alzheimer's disease. Meanwhile, it is unclear if the benefits of pharmacology treatments outweigh the risks posed by their prescription.

While we can’t help with prescriptions interfering with one another, we do help people with Alzheimer’s in a number of ways. We help people plan for the possibility of needing care in the future, we help them determine who will make decisions if they can’t, and we explore payment options like Medicaid or the Veterans’ Administration if paying privately for care will result in severe financial hardship. We would be happy to speak to you or a loved one privately about your specific situation and needs. For more information and further inquiries about your personal situation, please contact our office at 302.651.0113.